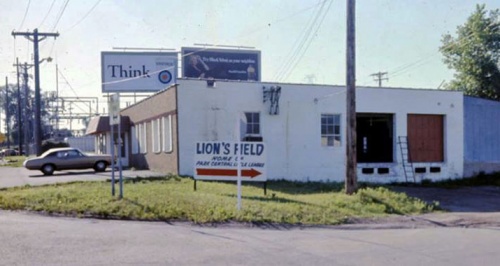 The Warehouse (often referred to as St. Louis Park Warehouse) was not a professional studio as such, but a converted rehearsal space where Prince occasionally recorded band performances after, in May 1983 after the 1999 Tour. The Warehouse, formerly a pet food storage facility with cement walls was located on 6651 Highway 7 in St. Louis Park, Minnesota and was initially rented for band rehearsals and dancing and acting classes for Prince & The Revolution, The Time and Vanity 6.

While initially rented for rehearsals and acting classes, a few songs were recorded in The Warehouse as well, even when the building wasn’t suited to serve as a studio-recording as it had no separate booth for the newly ordered API/De Medio console. To record there was a MARA MCI JH24 2"-24-Track recorder.

The Purple Rain album has been partially recorded at the St. Louis Park Warehouse in part. Check album page for details.

The following songs have been recorded at the St. Louis Park Warehouse: