Difference between revisions of "Album: Sign O’ The Times"

Eight of the album’s sixteen tracks were included on various configurations of the Dream Factory album, planned as the fourth album by Prince and the Revolution. When the Revolution was disbanded in October 1986, Prince reworked the album.

In late October 1986, Prince worked on an unrelated album, Camille (to be given the artist credit of Camille), on which Housequake, Strange Relationship and If I Was Your Girlfriend were included, before combining elements of the two projects to create Crystal Ball, a triple album initially also credited to Camille, but possibly also considered to be credited solely to Prince.

Warner Bros. were skeptical about releasing a triple album, and Prince removed seven of the 22 tracks and recorded the radio-friendly U Got The Look, completing the album on 15 January 1987 with the recording of an introductory piece acting as a segue from Sign O’ The Times to Play In The Sunshine.

The album went trough various track-sequences, until as late as the second week of January 1987 before it was finalized with the sixteen tracks ultimately on the release.

The album produced four commercially-released singles, Sign O’ The Times (which preceded the album), If I Was Your Girlfriend, U Got The Look and I Could Never Take The Place Of Your Man, as well as two promotional releases, Hot Thing (in the USA only) and The Cross (in South Africa only).

Prince supported the album with a major European tour, titled Sign O’ The Times Tour, which focused largely on the album (while missing some of Prince’s previous hit singles). Two dates on the tour were filmed and the resulting concert film, Sign O’ The Times was released worldwide, focused on the territories where the tour did not travel.

The album was certified platinum by RIAA three months after release, on [[Prince_Vault:Selected_anniversaries/July_2|2 July 1987].

|tracklisting = The compact disc version is a reissue from the LP.

|musicians = Prince - all vocals and instruments, except where noted (credited as Camille for lead vocals on Housequake, U Got The Look, If I Was Your Girlfriend and Strange Relationship)

|album promotion = US and UK press ads published in march and april 1987: 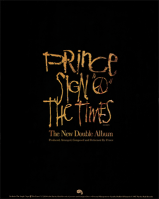 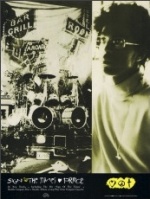 |trivia = A postcard was included in the vinyl issue of the album.

As well as for Sign O’ The Times movie:

|references = The Vault: The Definitive Guide to the Musical World of Prince by Per Nilsen & jooZt Mattheij, with the UPTOWN Staff (Uptown, 2004)