Manic Monday was the first single to be released from The Bangles' second album Different Light. It was released two weeks prior to the album, and contains two exclusive versions of the song. The song Manic Monday was written by Prince (under the pseudonym Christopher, a reference to his character Christopher Tracy from Under The Cherry Moon).

The single became The Bangles' biggest hit to date, reaching number 2 on the US Billboard Pop Chart, behind Prince and the Revolution's own Kiss, before their follow-up single, Walk Like An Egyptian, reached number 1. 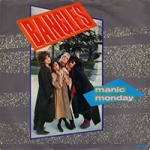