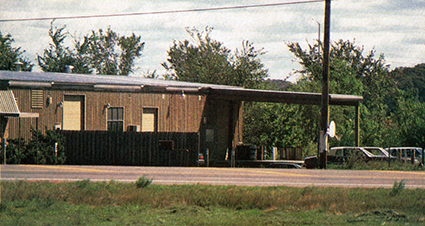 The Flying Cloud Drive Warehouse was not a professional studio as such, but a converted rehearsal space where Prince used to record mostly band performances between May 1984 and November 1984, when Prince embarked on the Purple Rain Tour.

The warehouse, with wood paneling on the outside was located on 9025 Flying Cloud Drive, Eden Prairie, Minnesota, near Starring Lake and about 10 miles south of the The Warehouse in St. Louis Park where Prince rehearsed and recorded until moving to this new place.

While initially rented, the facility and land were later bought by Prince for $400.000, and converted into a rehearsal space / studio. It was razed in the spring of 1985 with plans to built a new studio there (later: Paisley Park Studios). Eight versions of the proposed studio had been developed for the site by Bret Thoeny of Boto Design, until it was determined that the site wasn't large enough. There was too much traffic, and visibility was too high. The restrictive building codes and architectural guidelines in Eden Prairie also proved problematic. The decision to move to a new location in Chanhassen was made after construction grading of the complex had already begun and construction drawings were complete. Much of the original design plans for the studios, rehearsal rooms and support areas from the Flying Cloud Drive site were retained, after the new location on Chanhassen was selected. The complex was just expanded for the new site, so some of the engineering and design time was saved.

Prince started using the warehouse as a rehearsal space and studio in May 1984, after filming for Purple Rain in November and December 1983 was complete and having spent the first four months of 1984 in Los Angeles.

Prince used the building as rehearsal space and make shift studio. Like in the previous warehouse on Highway 7 in St. Louis Park, Minnesota sound issues were a challenge, as the building was highly unsuited for recordings. The console Prince had here was the API/De Medio, previously in the warehouse on Highway 7, and a MARA MCI JH24 2"-24-Track recorder, also previously in the Highway 7 Warehouse.

The following albums have been recorded at the Flying Cloud Drive Warehouse in whole or part. Check album pages for details.

The following songs have been recorded at Flying Cloud Drive Warehouse: